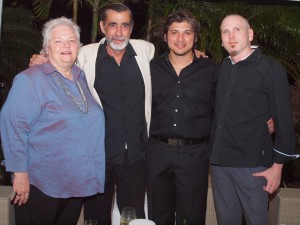 Maureen Heffernan, TCNJ Professor and Director of Young Audiences New Jersey (YANJ), was invited to lead a series of workshops as part of the Aruba International Film Festival this past week. The workshop, entitled 96 HOURS, centered around acting, creative writing, and film pre and post production. Joining her were NYU professor Darrell Wilson and filmmaker Daniel Heffernan. All three are faculty of the Emerging Artists Creativity Hub, a Saturday program at TCNJ designed for teen artists and conducted by YANJ in partnership with the School of the Arts and Communication.

The workshop classes provided intensive hands on training in the film-making process over a four-day period of time. The teachers team-taught the material and were able to bring their unique skills and abilities to all courses. Initially only 12 students were registered for the workshop, but over 59 students attended, with participants ranging in age from 12 to 68. Equipment was sparse (only eight cameras and five computers), but eventually several more computers were added.

The workshop was a success, and together, the students made 25 short films in less than seven days. The event culminated by previewing the films on a large screen at the conclusion of the festival. For more information on the festival and Young Audiences New Jersey, please visit: