Assistant Professor and Director of Bands Eric Laprade first heard Astor Piazzolla’s Sinfonía Buenos Aires in 2014 at a Detroit Symphony Orchestra concert. “I immediately thought that this piece, which had recently been rediscovered after being lost for many years, would lend itself to a wind band transcription,” shared Laprade.

Much of Laprade’s scholarly-creative work focuses on expanding the repertoire for the wind band. “With this specific project, I was amazed by the virtuosity and lyricism of the wind writing in the orchestral version. I was excited to create this transcription and bring Piazzolla’s virtuosity to the wind band medium.” shared Laprade.

Regarding The University of Michigan Symphony Band, Laprade said, “They are widely considered to be a leader in the wind band world, with a rich and long history of talented conductors and alumni, commissions and premieres, and compelling performances.”

Laprade received his Master’s in wind conducting at the University of Michigan. He felt incredibly grateful to work with such a talented group of students, including TCNJ ‘22 Music Ed alum Nicholas Napier, who is currently pursuing a Master’s in saxophone performance at Michigan. 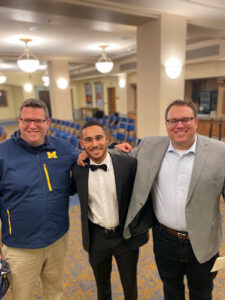 Laprade explained that the transcription of Piazzolla’s Sinfonía Buenos Aires was one of the most robust and fulfilling projects he has taken on. “It has been amazing to see the work come to life,” he shared, “I am so grateful to everyone who supported this work, especially the immensely talented students of the University of Michigan Symphony Band.”

Click here to watch a recording of the world premiere of Sinfonía Buenos Aires by the University of Michigan Symphony Band.