On the morning I learned of the Atlanta spa hate crimes, I lay in bed tied down by an anchor of emotions: grief over the loss of my Asian American sisters, fear for the safety of my family and friends, but underneath it all, hopelessness as to whether my country would ever acknowledge me as a fellow American. Admittedly, this was not the first time I encountered such emotions: my own racialized experiences as a Korean-born-American, combined with my awareness of AAPI’s (Asian Americans and Pacific Islanders) otherization from the 1850s to the present-day pandemic, fostered these ideas within me from a young age.

On the first day of TCNJ classes since the Atlanta spa hate crimes, I wondered if any of my professors or peers were still shaken by Tuesday night like I was. During my morning class, I inadvertently spent the eighty minutes composing myself behind the camera, rehearsing what I would say if our professor put these issues on the table at the start of class—I realized it was all in vain once the message: “meeting has been ended by host” appeared on my screen. Later in a separate class that afternoon, we discussed events that had taken place the previous week—lectures, deadlines, side conversations—but not what happened in our own country. It wasn’t until my third class on this day that a professor finally addressed the anti-AAPI sentiment in our country leading up to Atlanta, stressing that bias on any basis was not tolerated in our classroom—but I didn’t know if this was prioritized in the rest of my classes.

Perhaps this is why I wandered into the Communications Studies Student Advisory Board’s Listening Session on Tuesday night (“COMMTuesday”), despite belonging to a different department as an English-elementary education major. Advertised in a flyer I received from a club email as “a safe space for students impacted by and who want to combat anti-Asian rhetoric and violence”, I was curious to know what a TCNJ event amplifying the voices of Asian American students such as myself would be. Yet most importantly, I didn’t want to believe that like my own country, TCNJ had abandoned its AAPI community, at a time when we needed our school most.

I was not disappointed. Dr. Yifeng Hu, Associate Professor and Chair of the Communication Studies Department, served as moderator of the discussion, which she commenced by first addressing why it was necessary to adapt tonight’s COMMTuesday to support AAPI students.

After outlining the rising anti-AAPI sentiment behind the killings in Atlanta, Dr. Hu showcased the NowThis video “Daniel Dae Kim Speaks to Congress About Anti-Asian Hate” to demonstrate that what happened in Georgia was not an isolated incident. Although I like to think that I keep myself updated with the news of AAPI hate crimes, from Kim’s speech I was horrified to learn about victims such as Tadataka Unno: “a professional jazz pianist beaten so badly he can no longer play piano.” Because he survived unlike Vicha Ratanapakdee and Pak Ho, some consider Unno to be one of the “lucky” ones.

In his testimony before Congress, Kim also advocated systemic issues faced by the AAPI community, such as the model minority myth that “AAPI do not face racial barriers to success.” This was supported by real-world facts such as “the wealth disparity between the richest Asian Americans and the poorest is the largest of any ethnic group in America.” Dr. Hu’s selection of resources helped me realize why people in my classes may not have been vocal about the Atlanta spa hate crimes, because false American narratives such as these downplay the existence of AAPI racism in the first place.

In a second video Dr. Hu displayed of this same Congressional hearing (“’We are in pain’: Asian American lawmaker Grace Meng makes powerful speech”), COMMTuesday attendants listened as Congresswoman Grace Meng passionately spoke out against Republican Representative Chip Roy, who invokes that Meng’s proposed COVID-19 Hate Crimes Act will “police” free speech. Meng responds to Roy: “This hearing was to address the hurt and pain of our community and to find solutions, and we will not let you take our voice away from us.”

After laying down the necessary educational groundwork, Dr. Hu then opened the discussion for participant sharing, starting with herself. As a Chinese American approaching the twentieth anniversary of her setting foot in the U.S. and a New Jersey mom, Dr. Hu recalled an incident where a family member faced discrimination from passersby in their own backyard, and questioned her decision to immigrate to the U.S. after seeing the recent surge of anti-Asian hate crimes in the country. Attendants such as Italian Professor Dr. Simona Wright responded that she was disheartened to learn of Dr. Hu’s experiences, having seen how enthusiastic she appeared at meetings in light of these hardships.

At this point, Dr. Hu invited me to share why I had come to this COMMTuesday session: perhaps she sensed I had something to say from the glassiness of my pupils, or the deep furrows between my eyebrows. This had completely taken me aback—I was still processing Dr. Hu’s experiences, let alone my own from the past few days. However, moved by the vulnerability and strength of Dr. Hu, I realized if I remained silent, there was no point of me coming to this event in the first place—right here and now, TCNJ was ready to listen to students like me, and there was no assurance that I would get this chance a second time.

Thus, I spoke about what it was like for me as an Asian American student at TCNJ to only have one professor advocate against the Atlanta spa hate crimes, championed by law enforcement and the media as side effects of a “sex addiction.”

I expressed how although my professors may not have had intended this, I internalized the silence to mean that my community and I were not American enough to warrant a “class conversation”—especially since in these same classes, we had been discussing present-day events in our country that were reinforming our American values: the police brutality surrounding Black Lives Matter, the atrocities of the Capitol Hill Riot…

When I finally muted my microphone, I was unsure if I had said the right words. Had I come off as too exasperated? What if people were offended by the way I felt? Yet the responses from TCNJ students and faculty that followed consoled me that I was not alone.

Sophomore Communication Studies major Kelly Jung opened up about her own frustration with others telling her how she was “supposed to feel” in response to Atlanta, as well as performative posts she frequently encountered on social media, for example. However, Jung also shared how empowering her recent experience of attending a “Stop Asian Hate” rally in New York City was, and that in addition to this frustration, she was no longer going to allow the fear produced by the current attacks on AAPI dictate her life.

Testimonies from members of TCNJ’s AAPI community proved to be powerful. Bryanna O’Keefe, a Communications Studies major, commended Dr. Hu, Jung, and myself for our vulnerability, because it was this risk that allowed her to learn more about Asian American individuals’ experiences. Communications Department faculty, undergoing similar learning transformations, could also not withstand silence at this point: Film Professor Lorna Johnson-Frizell described how she brings her awareness of anti-Asian rhetoric into her own curriculum, through practices such as asking her students to note stereotypical portrayals of Asian characters in the films they analyze. 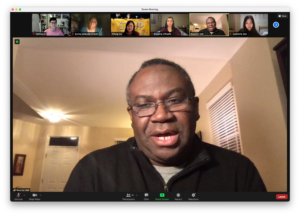 Dr. Maurice Hall, Dean of the School of the Arts and Communication, even invited students such as Kelly and myself to meet with him in order to discuss ways more AAPI perspectives and students could be included in his school’s curriculum.

After these audience testimonies, Dr. Hu concluded COMMTuesday’s #StopAsianHate listening session not through momentary words, but with permanent action: first, she invited attendants to sign a petition to the U.S. Department of Education that would encompass Asian American historical events in current public school curriculum, such as the Chinese Exclusion Act and Japanese Internment. In addition, Dr. Hu endorsed the PBS docuseries “Asian Americans,” an exploration on the history of Asian Americans, so tonight’s discussion would extend beyond the hour into our everyday lives.

Attendants agreed that the listening session Dr. Hu moderated was a “very important dialogue,” as commended by Communications Studies professor Dr. Susan Ryan. Assistant Dean Erica Kalinowski shared that “there were several occasions that I was brought to tears by the words said or videos played,” highlighting the importance of revising the COMMTuesday session to serve the needs of TCNJ’s AAPI community and allies.

Sneha Jacob, a Criminology major, recognized that “without discussion, we are not able to understand different perspectives of the issue at hand. Last night’s event was truly eye-opening.” Echoing Dr. Ryan and Jacobs’ mutual understanding, Carly Nocchi, leader of the Communications Studies Student Advisory Board, remarked that “I feel as though I walked away with a better understanding of what the Asian American community faces.”

If COMMTuesday’s #StopAsianHate listening session was to “support students,” then it was successful in doing so. Jung reflected that although there are obstacles with being an Asian American student during this time of heightened AAPI racism and violence: “Love trumps hate. There is so much more love and support than there is hate. And last night was a powerful symbol of that.” Professor Johnson-Frizell acknowledged this powerful student presence at COMMTuesday, expressing “the students are powerhouses and I was [so] glad to have met them.”

As I lay in bed later that night, I realized the anchor that had been weighing me down since last week no longer harbored heavy emotions such as grief, fear, and hopelessness—after speaking out at COMMTuesday’s session and listening to others, it was now a symbol of hope, signifying a new wave of AAPI consciousness at TCNJ.