Matthew Lawrence ’05 has returned to his alma mater to teach classes he once took as a student in TCNJ’s Department of Communication Studies. 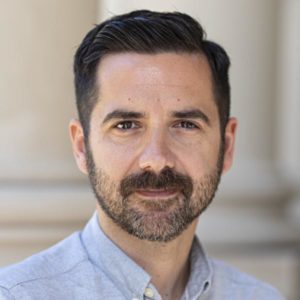 This semester, Lawrence is teaching Intro to Television Studio (COM 212) and Lighting and Cinematography (COM 368).

Some of Lawrence’s work includes a feature film called Uncle Peckerhead and short film Shoebox Redhead. Lawrence’s work has played over 160 festivals, museums, and art houses on four different continents. He has earned numerous awards for his work as writer, director, producer and editor.

Lawrence credits TCNJ with aiding in his career development.

“TCNJ and, more specifically, the communication studies department, afforded me my first opportunities to develop and grow as both an artist and filmmaker and later as an educator and academic,” says Lawrence. “I am over the moon to return to a place I consider home and work with some of the best and brightest students in the hopes of paying it forward.”