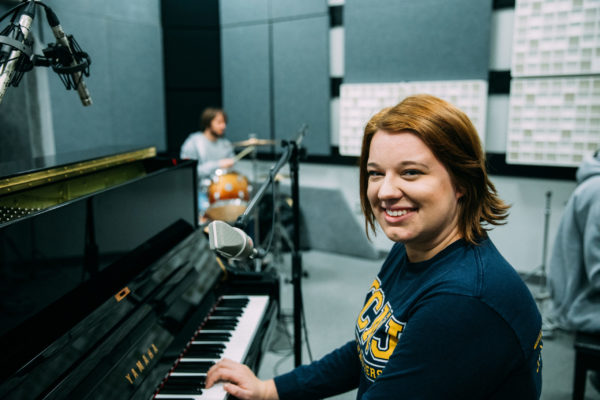 Teresa Nakra, associate professor of music and interactive multimedia at TCNJ, who has been working on the development of this minor for a number of years, said the minor  was “enthusiastically embraced.”

“We were starting to see a big ramp-up in student interest involving music technology, but there was an interdisciplinary link that needed to be strengthened before we could create the minor,” says Nakra. “The students were ready but there wasn’t a structure in place.”

In 2018, the conversation about a music technology minor was restarted and the program now has the structure “firmly in place,” says Nakra. The interdisciplinary minor bridges the Departments of Interactive Multimedia and Music, and welcomes students from all disciplines, says Nakra.

In order to complete the music technology minor, students must take five courses, all of which are cross-listed. Three music technology courses will be offered this fall: two sections of Electronic Music (MUS 345, IMM 250, AAV 385), one User-Centered Musical Design (IMM 470, MUS 370) and one Scoring for Interactive Media (IMM 270, MUS 270).

In User-Centered Musical Design (IMM 470,MUS 370), Nakra will work with students to propose their own projects or pick an existing project for her course.

“The idea is to create musical experiences that are meant to be interacted with by real human beings, as well as to iteratively improve upon those human-centered experiences,” says Nakra. “The Robert Wood Johnson Hospital has invited us to design online music therapy interventions for cancer patients. This will be a project that students taking this course can choose to work on.”

Amanda Brewer ‘21, an IMM major, has already signed up for the new minor.

“Although my studies are primarily focused in video production, I also love music and audio production,” says Brewer. “I’ve always been involved with playing music, but I never really got into the tech side until I took Dr. Nakra’s Scoring for Interactive Media class, where we made compositions for films and video games. We used Logic and I just loved the variety of sounds and effects I could get from that program.” 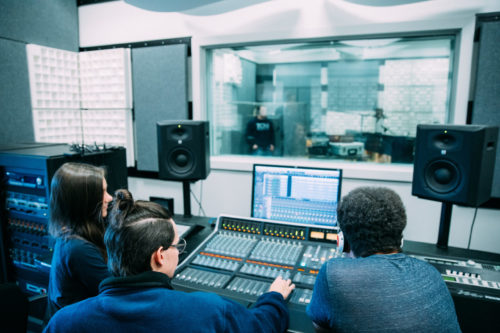 Brewer says she also took Electronic Music and Audio Synthesis with Collins, which led her to further explore Logic and develop her style.

“By adding this minor, I’m really just hoping to learn more about electronic music and music production and I’d eventually love to release some original songs as well,” says Brewer. “Since IMM is a pretty broad major, I like being able to add minors to be able to dive deeper into certain topics, and to add to my résumé so employers have a better idea of what my specific skill set is.”

Brewer is looking for a career that balances video and music, such as making music videos or documentaries for musicians and bands.

“While I may not need specific music tech knowledge to do this, I enjoy taking these classes and learning about this stuff, and I think having that knowledge shows that I really care about music,” says Brewer.

Another IMM major, Mistee Branchek ‘20, was accepted into TCNJ as a computer engineering major before she realized she wanted to add music to her studies.

“I grew up with a lot of music, and when I took my first guitar lessons in fifth grade, I was hooked,” says Branchek. “I learned to play many instruments during middle school and high school, when I also discovered my interest in programming and technology.”

Branchek says that the diverse experiences available in IMM have given her a solid foundation for her creative endeavors, including opportunities to involve music technology.

Branchek is interested in composing for games or working in a recording studio. “I think the skills that the music technology minor will add to my ‘interactive multimedia arsenal’ will be helpful when I pursue more musical opportunities that I’m interested in,” says Branchek.

Alex Cap ’11 took music technology classes while pursuing a bachelor’s degree in music from TCNJ. Cap is now a successful composer for film, video games, and live events in the professional film scoring industry in LA.

“I was introduced to the DAW (Digital Audio Workstation) in one of TCNJ’s music technology courses,” says Cap. “A DAW is now at the center of my workflow and almost as much of a ‘main instrument’ as the piano.”

“If you want to be able to adapt in a constantly evolving environment, take as many music tech courses as you have time for while at TCNJ – at the very least, you’ll be aware of what tools are out there at your disposal,” he adds.

Students interested in learning more about the music technology minor are invited to attend an online information session on the IMM@TCNJ Discord Server on Thursday August 13, 3:30-4:30 p.m. To register, email your Discord ID to nakra@tcnj.edu by 3 p.m. on August 13.