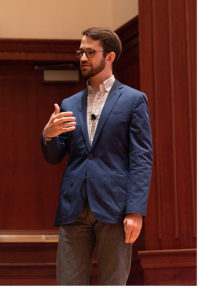 For the first Faculty Lecture Series of the Fall 2018 Semester, Professor Fishburn presented on A Personal History of Game Design. Professor Fishburn began his lecture with an interactive activity where he posed the question: “How have games impacted you on a personal level, specifically friends and family?” Professor Fishburn gave the audience one minute to collect their thoughts, one minute to share with a neighbor, and then asked a few volunteers for their answers. Through this activity, Professor Fishburn was able to label games as the “magic circle;” games become systems based on arbitrary rules that lift social constraints, ultimately allowing the player to become whoever they want to be within the “magic circle.”

Professor Fishburn then questions, “What are games for?” Professor Fishburn went into his personal history of gaming by sharing images of him as a young boy playing games and describing the impact games had on him up until graduate school. He used a variety of game clips that influenced his passion for gaming in order to explain to the audience the significance of games as a whole. Professor Fishburn was able to express the important link between visuals and sounds through the game Mortal Kombat, the need for imagination through Teenage Mutant Ninja Turtles, the impact of political messages in games through Crosser and La Migra, and the need for humane games that focus on education, health, and social awareness through Flower and Journey. With the the use of both visuals and explanations of these games Professor Fishburn posed another question, “Are games art?” He explained that this question became clear to him in graduate school where he created the game, Gaming the Network Poetic; this game is composed of five separate games that becomes interconnected as the player plays the game. This game was displayed at an art gallery, allowing the art of gaming to be recognized and showcased. Professor Fishburn concluded his talk by explaining that games represent who we are and what we value because games provide an emotional experience while still being entertaining.

Before the question/answer session, Professor Fishburn left the audience with a quote by Eric Zimmerman and Heather Chaplin, “Games are beautiful. They do not need to be justified.” Fishburn closed with this quote to assert that games expose our vulnerability and that, by playing these games, we allow ourselves to be vulnerable.