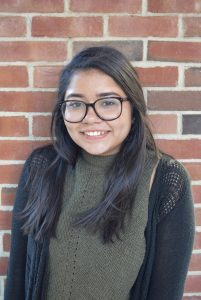 Student Spotlight: Emily worked closely with the Communications Department and pushed herself outside of her comfort zone to find opportunities within the department and the industry. Through her multidisciplinary major and minor, she has sought out the chance to be an active member of the school.

What are your plans after graduation?
I am hoping to be a short form editor in things such as commercials, short films and trailers.

What advice can you offer incoming students?
The one piece of advice I have for incoming students is to take any chance to make connections with not only your fellow students but also your professors. They are more than willing to help out in any way they can.

What is a memorable experience you had in the School the Arts and Communication?
One of the most memorable experiences I had was when I worked on a short film for Campus Movie Fest my sophomore year. I worked on the film with some of my fellow Communication Majors. We really believed in the film we created and the message behind it. I had to miss the festival because I was in class but I started getting text messages congratulating me and telling me how much people who had seen it enjoyed it. I later received messages from my team letting me know we had won Best Story at the ceremony! It was great moment because we saw that our peers and professors had believed in our film as well!