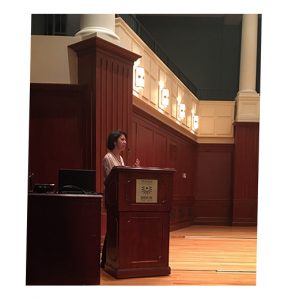 Our fifth Brown Bag lecturer of the Fall 2017 semester featured Jennifer Lin, an award-winning journalist and former reporter for The Philadelphia Inquirer. In her distinguished thirty-year career, she served as the paper’s New York financial correspondent, Washington foreign-affairs reporter, and Asia bureau chief, based in Beijing.

While at The Inquirer, Ms. Lin covered stories ranging from an investigation of the Philadelphia Housing Authority to a year-long project after 9/11 in which she followed families in Lower Makefield, Bucks County, who lost relatives at the World Trade Center. She even covered a story about a man named Donald Trump, back when he was an Atlantic City casino owner.

Ms. Lin took us on her journey of turning family history into narrative nonfiction, as she discussed her new book, Shanghai Faithful: Betrayal and Forgiveness in a Chinese Christian Family. Using the tools of investigative reporting, she was able to uncover one of the hidden stories about her family. Shanghai Faithful is the 150-year saga of a single family from the world’s most populous nation. A family memoir with universal themes, the story bears witness to China’s tumultuous past, and brings the reader full circle, from years of suffering to forgiveness and redemption.