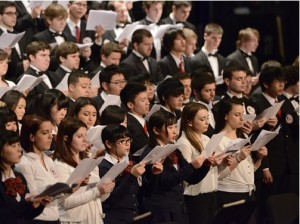 The College of New Jersey Department of Music is pleased to announce that TCNJ’s Choirs will once again be performing in Jazz at Lincoln Center’s Frederick P. Rose Hall as part of the third annual Project Hand-in-Hand concert. The choirs, led by Dr. John P. Leonard, along with 90 high school students from the earthquake disaster-area in Japan, and the New York City Opera Orchestra will collaborate to perform Carol Orff’s Carmina Burana: Secular Songs for Singers and Choruses to be Sung Together with Instruments and Magic Images on Wednesday, March 26, 2014 at 7:30pm. Three soloists will be featured: Olga Makarina, soprano; Dina El, tenor; and Won Cho, baritone. The Project Hand-in-Hand performance serves to support Japan’s long-term recovery efforts as well as a means to express gratitude for the support that has been received from around the world.

A magnitude 9.0 earthquake struck off the coast of Japan on March 11, 2011, triggering tsunami waves that caused widespread death and destruction, as well as nuclear meltdowns at a power plant in an area known for its active and talented student choral groups. Many ensembles were forced to cease their activities and were not able to perform. Atsushi Yamada, a New York based conductor, visited the region shortly after and began to plan Project Hand-in-Hand to support reconstruction within the disaster area.

Project Hand-in-Hand is made possible by the support of donations from organizations and individuals, as well as through public and international exchange funds. Yamada looks to maintain awareness of this devastation and bring s

upport to the region still recovering from the disaster. In addition, it is seen as an opportunity for students directly impacted by the area to perform with a professional orchestra, express hope for a full recovery, and deliver their voices to the world. Tickets to this performance are free of charge, and available at http://handinhandconcert.com/en/sec10/

Carmina Burana: Secular Songs for Singers and Choruses to be Sung Together
with Instruments and Magic Images