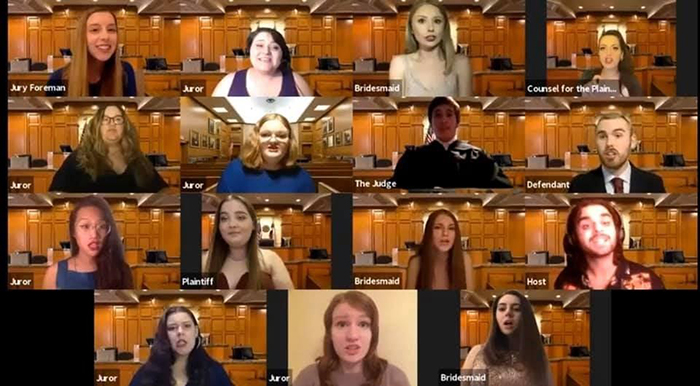 Lyric Theatre, a course at TCNJ known for popular performances such as Urinetown and Jesus Christ Superstar, surmounts its latest challenge by transitioning their spring performance of Trial by Jury from the stage to the screen.

Julia Corso, a senior music and communication studies major, took on an honors project as the director of Trial by Jury. With mentorship and guidance from Professor Jennifer Little, the two have worked to adapt the class to an online format and record the performance virtually. Creating an entirely virtual show has come with a variety of challenges.

“The biggest challenge so far has been the logistical side of things, trying to piece the bits of the show together in a cohesive fashion that will tell the story through a digital medium,” Corso explained. “I have been working closely with Professor Little and the production team to translate the big picture ideas to the digital medium.”

Together, Corso and Little reviewed the entire score to decide what musical numbers they could substitute with dialogue. Corso’s original vision of performing the operetta as a reality television show lent itself to moving to an online format. They were able to keep multiple solo arias, duets, and two full ensemble numbers for the final production piece. Little commends Corso for her hard work and ability to adapt in such a short amount of time.

“Julia has had to rethink, restrategize and reformat an entire production in the space of two weeks. It has been overwhelming at times but she has moved quickly to adjust to the new “norm” of our world,” Little said. “Julia quickly committed to doing this show virtually and then shifted to how she could take her stage experience and shift it to more nuanced acting choices for video.”

Members of the cast needed to adjust to this new normal as well. Hannah Stratton ‘23, a music education major, describes how working on Trial by Jury has impacted her and the influence Corso has had on the production.

“Working on Trial by Jury at home has been one of the coolest experiences I have had related to theatre at this point in my life. At first, I was worried that we wouldn’t be able to do the show justice and bring it to life in the way everyone had hoped, but Julia has done such a good job keeping us motivated and making this just a lot of fun,” Stratton said. “Still having TBJ rehearsal to look forward to every week has kept me positive throughout this difficult time, and without Julia’s vision and encouragement, I don’t know if the show would have still been possible.”

Little emphasizes how important the class community has been throughout this entire process.

“Most importantly, we kept our community. This has really brought home to us, just how tightly knit and supportive Lyric Theatre is. Every SINGLE member came on board to make this happen – despite it being far, far different than what we planned or students expected their experience to be,” Little said. “Students embraced the new ideas Julia brought to the table and made additional suggestions. They recorded additional footage for us to use. They played and had fun with the material in new ways and ended up telling a new version of this old classic.”

Lyric Theatre has offered a variety of other students with similar opportunities to embark on an independent study or advance their desired skill-set within the class. This includes opportunities within marketing, choreography, graphic design, directing, stage management, video editing, and more. Corso is one of many students who have been able to advance their education through Lyric Theatre’s unique opportunities.

“Going forward, I know that I can take these skills that I have learned into my life post-graduation: both in and out of the theatre world,” Corso said.

TCNJ Lyric Theatre’s production of Trial by Jury (Quarantine Edition), will be released on YouTube on May 8, 2020, at 8 p.m. on its YouTube channel.