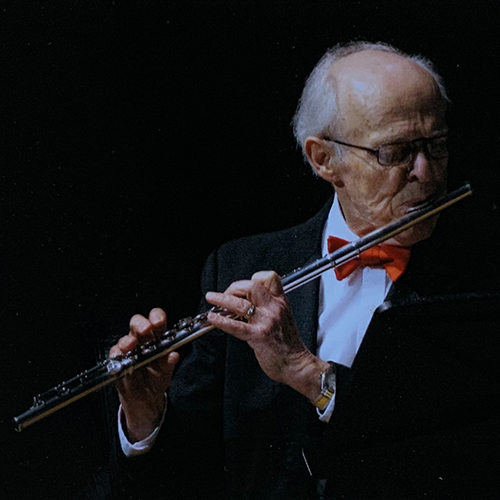 Dent Williamson, an emeritus associate professor of music, passed away on January 18, 2020. Williamson, who had taught flute at TCNJ for 32 years, was a talented musician and dedicated teacher who had touched the lives of countless music students. He had recently celebrated his 89th birthday.

A native of New England, Williamson earned Bachelor and Master of Music degrees at the New England Conservatory in Boston and a doctorate degree in Music Education at Combs College of Music in Philadelphia.

“My first flute teacher at TCNJ passed away this weekend. As a late bloomer who settled on becoming a music major in the fall of my senior year of high school, I knew next to nothing about flute playing when I auditioned. Dent Williamson saw something in me that I surely didn’t even see in myself. He met me where I was at the time and took my playing to a level that I never thought was possible. He challenged me without ever motivating with fear, and supported my development as a musician for the first three years of undergrad before he retired. Now, as a professor of music at TCNJ, I am honored to occupy the office that he once held.

He was a kind and gentle soul and we kept in touch through the years. I loved receiving Christmas cards that included pictures of his travels around the world and I especially enjoyed our occasional phone calls, where the timbre of his voice saying ‘Hello, Colleen…’ never seemed to change despite the passing of time. I’m so glad that I was able to visit him in September. Though he was already sick, he still had that special sparkle and we spent the most lovely afternoon together. It was difficult to leave, knowing that I wouldn’t see him again. I thanked him for everything, hugged him, and said, ‘Goodbye, Dr. Williamson’ as I left. Goodbye, Dr. Williamson…you saw a light in me and made it shine brighter. It’s what every teacher should do for their students.”

Professor of Music Robert McMahan, who had worked with Williamson at the college, said that Williamson had played with the Boston Pops Orchestra, under its famous conductor Arthur Fiedler after studying at the New England Conservatory. McMahan share following memory about his colleague:

“Among his experiences there was playing in the premiere of American composer Paul Creston’s Concerto for Accordion and Orchestra, with the great accordion virtuoso, Carmen Carrozza performing.  As a classical accordionist myself, and not knowing this about Dent at the time, I performed the concerto around 2007 with the TCNJ Orchestra, conducted at that time by Phillip Tate. Dent was there for the concert and suddenly remembered and mentioned to me that he had played in the premiere back in the 1960s.  Small world!  The next time I saw him he gave me his copy of that program, with his and Carrozza’s name in it, and which I will always treasure.”

Williamson was a loving husband to his wife, Joan, and father to his children Andrew and Lesley, and a proud veteran of the United States Air Force.

Associate Professor of Music Suzanne Hickman, coordinator of vocal studies and music minor advisor, recalls how Williamson was on the faculty when she joined the college.

“He was a wonderful musician, a great colleague, and a caring and knowledgeable teacher,” Hickman remembers. “He and Joan hosted my first husband and I at Chautauqua one summer and we had a great time with them. Their hospitality and friendship are fondly remembered.”

“He was a helpful advisor and mentor to me as a new music theory faculty member during most of the 1990s, and was always frank, direct, and helpful in his assessments of my teaching and orienting me to the nature of TSC students,” McMahan remembers. “Both he and his wife Joan, who worked in the TCNJ Library for many years, were always cordial to me and remained faithful attendants of TCNJ concerts long after they both retired from what was by then TCNJ.”