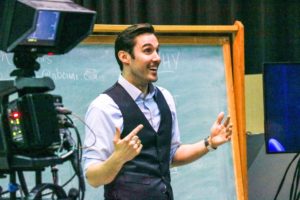 NBC10 Philadelphia news anchor Keith Jones visited the College on Monday, April 8 at 11 a.m. to give a masterclass on his experience in broadcast journalism in the Kendall Hall TV Studio.

Jones anchors the 5 p.m. broadcast timeslot on weeknights at NBC10. His passion for broadcast journalism has led him to report on a variety of entertainment and political events, such as the Super Bowl, the Olympics and the demilitarized zone between North and South Korea.

Students and staff filled their seats and absorbed all they could from the New Jersey native, who is now a multi Emmy and Edward R. Murrow award-winning television news anchor, as he revealed all that he has learned in his career.

Jones opened up by expressing his gratitude for time in broadcast journalism.

“Journalism is one of the most fulfilling, impactful, high-responsibility jobs that you guys can go after,” he said. “It is in many ways high risk, high reward, but it has opened doors for me in life that I never would have dreamed.”

He played his résumé tape of news packages from his early years in the business to show his humble beginnings.

“I had to fake it ’til I made it,” he said. “I wasn’t good on camera … I lowered the volume of my voice in the editing software to give it more bass because I was so self-concious of my voice.”

He encouraged journalism students to make mistakes, as they made his greatest lessons.

Jones expressed that while some in the field may find President Donald Trump’s attempts to call news stories fake news to be detrimental, Jones said that he sees it as a test of journalistic integrity, which he calls the “Trump Opportunity.”

“I know that people are watching with higher scrutiny than they ever have in the past and I think it’s a great thing,” he said. “(Trump) provides a tremendous opportunity to be right, because you can’t criticize the truth.”

While print and broadcast journalism share many principles, Jones made a vital distinction.

Jones explained why this heart-and-head connection is crucial to providing stellar broadcast journalism.

“Our goal as broadcast journalists is to get people to think about the stories that we do,” Jones said. “The moment they go from heart to head is the moment we’ve hooked them.”

Jones then showed the audience a news package he did for the 2018 college basketball national championship game, where he interviewed a group of Villanova fraternity members who drove down in an RV to San Antonio, Texas for the big game.

“I could’ve talked to any fan, but it would’ve been really boring if I just grabbed a wealthy alum who took a private flight down to Texas,” he said. “I decided instead to put myself in the shoes of a college student … It takes a lot of extra effort to do something like this, to find a great character.”

Relating back to getting the viewer to pay attention, Jones said he prefers the unexpected, interesting story over the predictable events.

“I’m the eyes and the ears of the viewer back home,” he said. “If I’m showing them just some random person at a team hotel and not grabbing their attention, they’re never gonna stay for my full story or at least my full view of what’s going on.”

“I really enjoyed seeing Keith Jones,” said Julia Duggan, a freshman music major. “He brought a lot of new and different perspectives and I really hope that we see him again soon on campus.”

Jones admitted that while he must stay light on his feet at all times in the hectic occupation of journalism, he would not trade his experiences or ability to inform the people for the world.

“I found out at 7 p.m. once that Kevin Hart was in town,” he said. “They were like, ‘go interview Kevin Hart.’ Life doesn’t prepare you for these things. It’s strange, but it’s exciting. It’s why this business is so fulfilling. At the end of the day, while these are all cool experiences, at its heart we are providing a service.”