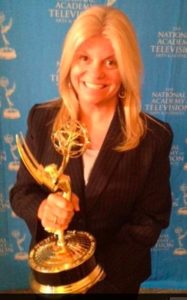 On Thursday, April 25th the Radio/Television/Film Senior Practicum of the Communication Studies Department will host guest speaker and TSC/TCNJ alumna Ann Marie Williams-Gray. An Emmy Award winner, Ann Marie has risen to the top of her profession, producing television programs such as “Live with Kelly and Ryan”, “The View” and “The Talk”. Ann will talk about her career, the nature of the television industry, producing and working in network television. The class meets in the Kendall Hall television studio at 5:30 p.m. The are about 30 seats available to people who are not enrolled in the class.