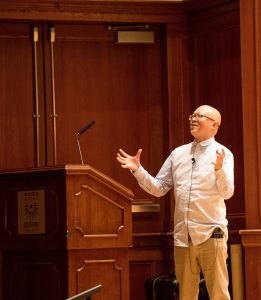 Today’s Brown Bag Lecture, presented by graphic designer Allan Espiritu, highlighted the importance of rejecting complacency and staying personally connected to the art we create and consume in the era of mass produced media.

In 2017, Mr. Espiritu was included in the Barnes Museum’s critically acclaimed show Person of the Crowd.  He is an active member of AIGA Philadelphia, serving as president in 2013. Most recently, he was named the 2017 AIGA Philadelphia Fellow, the chapter’s highest honor given to a member. Mr. Espiritu heads the graphic design concentration at Rutgers University, Camden Campus.