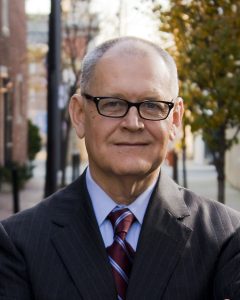 Confused about what is to become of the Affordable Care Act (a.k.a Obamacare), and what forces have led us to where we are today? Best-selling author Wendell Potter, one of the most distinguished voices on health-care policy, spent 20 years as a corporate public relations executive for two of the nation’s largest health insurers. Now he has returned to his first career of journalism and uses his platform to explain how the system really works, and to point to ways to improve it.

In widely covered Congressional hearings during the health care reform debate in 2009, Potter disclosed how insurance companies, to boost profits, engaged in practices that  forced millions of Americans into the ranks of the uninsured. His award-winning and New York Times bestselling book, “Deadly Spin: An Insurance Company Insider Speaks out on how Corporate PR is Killing Health Care and Deceiving Americans,” is a stark warning that corporate spin is distorting our democracy. Potter is also the author of “Obamacare: What’s in it for me? What everyone needs to know about the Affordable Care Act.”

Potter is a regular contributor for The Huffington Post and HealthInsurance.org. His articles have appeared in a wide variety of media, including Newsweek, The Nation, The Guardian (UK), CNN.com, NBC.com, the Center for Public Integrity, The Los Angeles Times, The Tampa Bay Times, and Democracy Journal. He has been the subject of numerous articles in the U.S. and foreign media, including The New York Times and The Washington Post, and has appeared frequently as a guest on ABC, CBS, NBC, FOX, MSNBC, PBS, and NPR. He also has served as a consumer representative to the National Association of Insurance Commissioners. His latest book, coauthored by Nick Penniman, is “Nation on the Take: How Big Money Corrupts Our Democracy and What We Can Do about It,” which exposes legalized corruption and links it to kitchen-table issues citizens face every day.

His newest project is Tarbell (www.Tarbell.org), an independent, nonpartisan, nonprofit journalism platform that will combine investigative reporting with solutions journalism. It is scheduled to launch in mid-2017.