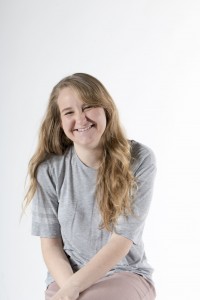 What drew you to being an IMM major?
I was always interested in creative outlets. I didn’t know that design and programming could be a career, it’s just something that in 4th grade I started making my own websites and stuff. That was separate from everything else I was doing – I think I wanted to be a marine biologist. It wasn’t until I decided to start applying to colleges that I decided to be a graphic design major, but I didn’t like all the fine art requirements because I didn’t consider myself a fine artist, I considered myself a digital artist which is a little bit different. When I found IMM, it seemed like something that was so unique  that I’d never seen before. It was a combination of a lot of things that I was interested in and I realized for the first time that I could have a job doing something creative.

What do you want to do with your degree?
I would like to go into digital product design, which is something that is kind of new. It’s the design of website and mobile apps, products like Snapchat and Instagram that are considered products because they, just like a physical product, have a lot of features that need to be worked on and tested and improved to be sure that they’re good. I would like to be the person who tests that to make sure it’s working and then design new features – kind of a combination of user experience design and visual design. I’d like to work for either like a tech company that has one product that I would be building on, or a design firm where we have clients and I get to do a bunch of things.

You interned last summer at Ashoka, a nonprofit that helps social entrepreneurs. Tell us about that experience.
One aspect that I want to be part of my career is the concept of design for social impact, which is basically design work for nonprofits or social entrepreneurs who are aiming to improve the world in some way but maybe don’t have the greatest design chops and could benefit from someone with that kind of background. Last summer I was really trying to explore that area. Ashoka is a social entrepreneurship network, which basically means they are a non-profit that selects leading social entrepreneurs, called “Ashoka Fellows,” and helps them grow their impact, and I was a user experience design intern for them. As part of my internship, I ended up working with an Ashoka team and one of its partner organizations called Concero Connect. Concero Connect’s whole aim is to bring internet to places that don’t have it. It’s really interesting: they use satellite broadband Internet combined with mobile money to make Internet affordable for people in such places as rural Africa and India. I ended up making a video explaining their entire, very complicated deal in a user-friendly and interesting way. I just talked with them a couple weeks ago and they’re still using the video and it helps them a lot.”

How was your internship experience different than being in the classroom?
It’s invaluable. You can get a lot of really cool, really good experience and really helpful advice from your professors, but it’s nowhere near like being in the industry. Your deadlines aren’t so that you can get the 100 on your test, they’re so that you can actually deliver a product that someone is actually going to use. Just the working environment, learning to work with your coworkers and everybody, it’s a very different experience.

Has TCNJ’s liberal learning model helped prepare you for your field?
As far as the classes go, I think the multidisciplinary background is really helpful. I think that when interviewers see what a broad range of skills you have, that’s very exciting to them – especially in a smaller organization or one with a smaller design team –  because they know that you can help them with multiple different things. As a designer, you can’t just know about design. If you only know about design, when you have a real-world problem that has to do with marketing or biology, then you’re going to be completely lost. You have to know who you’re designing for. So in that sense, you either have to rapidly research that subject or hope that you have some background knowledge. Where the multidisciplinary skillset, with the broad, whole college, comes in handy, is that you get all those skills that are really important so you just have a general understanding of the world, so you understand who you’re designing for.

Advice for new students?
Definitely reach out to professors and other students as much as possible. Put yourself out there even if it’s scary. I was very shy coming in, but in we have a social space in IMM that we’re always hanging out in. Just by sitting there and being in the space of other students working, you don’t even have to talk with them, you’re going to pick up on things, you’re going to learn interesting things that students are working on that you never would have thought of. By getting to know your professors you’re really making lifelong connections. Jump on every opportunity that comes your way. Take every opportunity that comes to you, and just be involved.

What is your favorite TV show?
Honestly I don’t watch a lot of TV. I’m a fan of Arrested Development though.

What are your hobbies?
Aside from design, I’m a huge fan of strategy board games, listening to podcasts, and outdoor adventuring.

What’s your favorite hangout spot on campus?
You can always find me in the IMM lab (known simply as 206) both working and hanging out.

If you could have any super power, what would it be?
Teleportation. I have lots of places I want to explore and not a lot of time to get there!