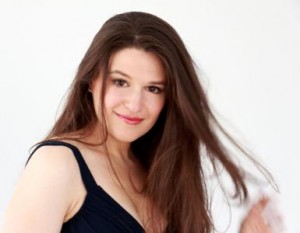 The College of New Jersey Department of Music and the Center for the Arts presented soprano Robin Johannsen on Saturday, November 2, 2013 in Mayo Concert Hall.   This event was Johannsen’s United States premiere solo recital.  The program consisted of works by Handel, Mahler, Schubert, Ravel, Bernstein, and Mozart, in collaboration with the Department of Music faculty Tomoko Kanamaru as well as the Dean of the School of Arts and Communication, John C. Laughton. To see clips of the performance, please visit the links below.

Since her debut with the Deutsche Oper Berlin in 2002, Johannsen has been sought after by the most prestigious opera houses, symphony halls and music festivals throughout Europe. In recent years, she has also made several appearances in the USA, performing with the Pittsburgh, Dallas, and Baltimore Symphony Orchestras as well as with the Oregon Bach Festival under such celebrated conductors as Helmuth Rilling, Marin Alsop, Robert Page, and Jeffrey Kahane.

← IMM Student Alexander Young is our February Student Spotlight!
The College of New Jersey to Present Major Exhibition on Afghanistan →