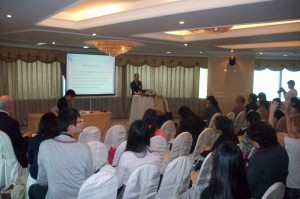 On November 9, 2013, Jordan Kohn, a senior communication studies major, presented a paper on “Comparing Coverage of Child Labor and National Characteristics: A Cross-National Exploration” at a conference on “Communication and Social Transformation” in Shanghai sponsored by the most prestigious scholarly communication studies organization in the world, the International Communication Association (ICA). Only after her paper, originally written for professor John Pollock’s international communication class, was accepted for the November 8-10 conference did Jordan realize that it was the only conference paper written by an undergraduate.

In her paper comparing newspaper coverage of child labor in 21 major newspapers in as many countries worldwide, Jordan found that higher levels of “privilege” (for example, higher GDP/capita, literacy rates, life expectancy) corresponded with coverage de-emphasizing domestic government responsibility for child labor conditions, instead giving greater emphasis to “societal” responsibility (charities, Non-governmental Organizations – NGOs, and other “outside” organizations such as foreign governments – e.g., US Agency for International Development, and the United Nations). In Shanghai, Jordan found herself on the same panel with the chair of the communications studies department at Indiana University and a panel respondent, one of the most distinguished scholars in the world, from the University of Texas. After Jordan learned of her paper’s acceptance, her advisor professor John Pollock added additional analysis and editing to generate a student-faculty co-authored paper. Pollock explained: “It is unheard of for undergraduates to have refereed papers accepted for conferences of the ICA. Jordan’s presentation represents a major breakthrough for undergraduates everywhere. Our department could not be more proud of her accomplishment”. Jordan’s parents accompanied her to Shanghai.

Jordan comments, “I recommend TCNJ to any prospective freshman or transfer student. I still find it unbelievable that this school and Communication Studies Department has made it possible for a transfer student like myself (who had even switched majors) to not only graduate on time, but also to feel accomplished. I don’t believe I would have had the same encouragement and opportunities had I decided to study communication studies anywhere else. “