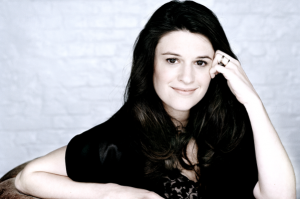 The College of New Jersey Department of Music and the Center for the Arts are thrilled to be presenting Philadelphia-born soprano Robin Johannsen on Saturday, November 2, 2013 at 8:00PM in Mayo Concert Hall.  Since her debut with the Deutsche Oper Berlin in 2002, Johannsen has been sought after by the most prestigious opera houses, symphony halls and music festivals throughout Europe. In recent years, she has also made several appearances in the USA, performing with the Pittsburgh, Dallas, and Baltimore Symphony Orchestras as well as with the Oregon Bach Festival under such celebrated conductors as Helmuth Rilling, Marin Alsop, Robert Page, and Jeffrey Kahane.

This event will be Johannsen’s United States premiere solo recital.  The program will consist of works by Handel, Mahler, Schubert, Ravel, Bernstein, and Mozart, in collaboration with the Department of Music faculty Tomoko Kanamaru as well as the Dean of the School of Arts and Communication, John C. Laughton. A light reception sponsored by the TCNJ Alumni Association will follow the performance in the Pelson Lobby of the Music Building.

John C. Laughton, clarinet: Dr. Laughton is the Dean of the School of the Arts and Communication at The College of New Jersey.  He has performed as a soloist and chamber musician in major concert halls and conservatories throughout the United States, Europe, Russia, Ukraine, Georgia, Brazil, New Zealand, The People’s Republic of China, and The Republic of China. He has served on the panel of judges for the Taneev International Chamber Music Festival in Russia and The Fourth Georgian Competition of Musician-Performers in Tbilisi, Georgia. The recipient of two Fulbright Fellowships, he holds advanced degrees from The University of Iowa (DMA) and The Catholic University of America (MM).

To purchase tickets to this event, please visit www.tcnj.edu/boxoffice or call 609-771-2775. For information on Robin Johannsen, please visit http://www.robinjohannsen.com.