EWING, NJ, AUGUST 22, 2012–Art professor Bruce Rigby is set to retire at the end of the fall semester after decades of teaching at The College of New Jersey. September marks his forty-first year in the Department of Art and Art History, and it coincides with the opening of Bruce Rigby: Recent Workon September 5 in the TCNJ Art Gallery.

“It was about time to retire, I’m done,” he said with a laugh. “I’ve spent two-thirds of my life teaching art. It’s time to do something else.”

After completing his B.A. in Art at the University of Bridgeport, M.A. in drawing, and MFA in painting at Northern Illinois University, Rigby came to TCNJ to teach two-dimensional design, color theory, painting, and drawing in 1972.

Rigby said he would not have had it any other way.

“To teach effectively, you’ve got to know yourself and your subject. I love art, and I love teaching it,” he said. “Also, to teach effectively you have to keep up with research and technology, so you’re always learning something new.”

Rigby does not keep the love all to himself — his enthusiasm for teaching and learning rubs off on his students. Over 3,000 students, to be exact. Between three courses a semester, and a handful of students in the summer, Rigby has seen many faces come and go.

“I started here in the seventies, when it was full of free expression,” he explains. “There’s been a lot of advancement since then, and I’ve seen how art develops as the generations change.”

Rigby also has a unique and rather rare perspective on TCNJ. He has seen the College go through two names and the Department of Art and Art History housed in three different buildings – first in Green Hall, then Holman Hall, and then to the new Art and Interactive Multimedia Building.

“There’s been a lot of packing,” he chuckles.

Rigby’s artwork has been included in more than 185 exhibitions nationwide, including 20 solo exhibitions. 30 have resulted in awards. His work is seen in many museum collections such as the New Jersey State Museum and the Trenton City Museum, as well as private and public collections, including AT&T, Bristol-Meyers Squibb, City Corp Bank, Ethicon Corp, Johnson & Johnson, and Ortho Pharmaceutical Corp. Aside from the upcoming fall exhibition at TCNJ, his most recent solo exhibition was a retrospective exhibition at Rider University in 2008.

But teaching and creating art are not Rigby’s only passions. He enjoys water skiing with his son Jason and kayaking, skiing and bicycling with his wife Mary.  He is an avid motorcyclist, having ridden to Florida in 2011 and Canada after TCNJ’s 2012 commencement ceremony.

Dr. Lois Fichner-Rathus, who is a professor of Art History at TCNJ and who has known Rigby since 1982, reflects on Rigby and the time they have spent together as colleagues, “…no one has committed more to the care and development of our curriculum and our students. Now that Bruce is going on to other things, there has been–understandably–a lot of reflection on the ways in which he has served as a mentor and role model to generations of art majors. And of course that is exactly what he has been; there is none finer.”

Matthew Pembleton (Art Education, ’12) also had nothing but kind words regarding Rigby. “Almost every art student entering TCNJ had to take Color Theory with Professor Rigby. Though it was challenging, I think we all remember what we learned and were able to apply it to other classes. Some of the best memories and stories certainly came from his engaging, thought-provoking, and entertaining classroom.”

While Rigby will be missed, his inspirational, humorous, and infectious ways will not soon be forgotten. He leaves his current students and those to come with this advice:

“Always be true to your own ideas, goals, and self. Create with passion, work hard, and be the best you can be with whatever you chose to do in life.” 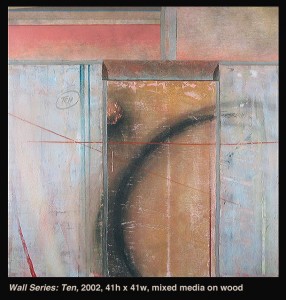