Presented by TCNJ Institute for Social Justice in the Arts & Humanities
March 2-7, 2015

[As of Monday, March 2, registration for the Institute for Social Justice on Saturday, March 7 is now closed].

This March, TCNJ Schools of Arts & Communication and Education are pleased to present an interdisciplinary week-long series of events revolving around the 10th anniversary of Hurricane Katrina. Katrina Ballads joins together disciplines including music, education, communication studies, and the humanities and will include musical performances, film screening, lectures, and a day-long symposium by leaders in the arts and social justice. Katrina Ballads ties heavily to TCNJ’s 2014-15 theme of “Justice” by drawing attention to how the arts and music can contribute to economic and social development.

Film screening: When the Levees Broke: A Requiem in Four Acts by Spike Lee
7PM, Kendall Hall Screening Room, free and open to the public
A 2006 documentary film directed by Spike Lee about the devastation of New Orleans, Louisiana due to the failure of the levees during Hurricane Katrina.

Cooking Cajun: Celebrating Creole Culture
11-4PM in Eickhoff Dining Hall, $8 at the door
A lunch buffet celebrating the food and music of the Louisiana people.

Panel Discussion
6:00-7:30PM in the Library Auditorium, free and open to the public
A panel discussion with contributing authors of Teaching the Levees curriculum. Teaching the Levees, “a curriculum for democratic dialogue and civic engagement” uses Spike Lee’s film When the Levees Broke to engage students in discussions about citizenship, economics, democracy, media, and systemic injustice.

The culminating event is on Saturday, March 7, and is open to all high school students with interests in music, art, media, communications, social studies and/or social activism.

We welcome all high school students to attend a LIVE performance of composer Ted Hearne’s Katrina Ballads, a piece that explores issues of social justice through media sound bytes from the weeks that followed Hurricane Katrina. You are also invited to:

If you have any questions or would like additional information, please contact Dr. Colleen Sears at colleen.sears@tcnj.edu. 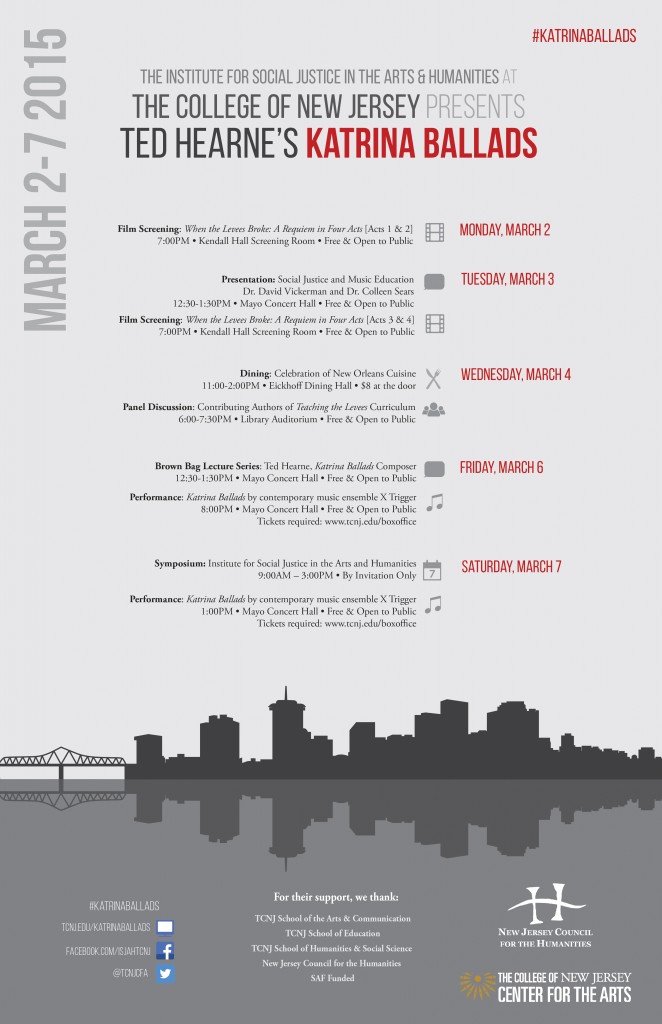