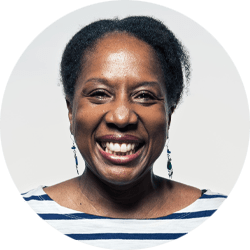 Lorna Ann Johnson (also known as Lorna Johnson Frizell) is a filmmaker and mother whose previous works have been screened at film festivals within the US, including the  New Orleans Film Festival, the Mill Valley Film Festival and Women in the Director’s Chair as well as internationally.  Her film My Wolverine received the Jury Award at the 5@5 Program at the 1998 Mill Valley Film Festival and Best Experimental from the National Black Programming Consortium.  Her documentary Freedom Road (2004) which profiles women prisoners in a memoir writing workshop has been broadcast nationally on US television and has been screened internationally.  It is currently distributed by Women Make Movies. In late 2006 she was invited to present her body of work at the Whitney Humanities Center at Yale University. Just Another War chronicling the impact of war on three women is her most recent work.  It has recently been screened at the 2008 Athens Film Festival in Ohio and the 2009 Montreal Internal Human Rights Film Festival.