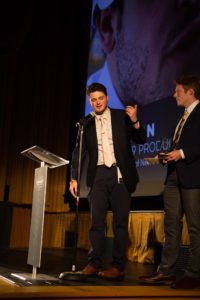 Rising Communication Studies seniors Tyler Law (left photo) and Kevin Walsh (right photo) received the National Best Comedy award for their short film “Milkman” at this year’s national competition of Campus Movie Fest in Atlanta, Georgia. Campus Movie Fest is the world’s largest student film festival. Each year it receives more than a thousand submissions from students competing on different campuses across the country. Only the top four films from each college campus are allowed to screen at the national event in Atlanta.

“Milkman” spins a humorous tale of a washed-up hero saving the day for his community, and the woman he loves, with an unusual source for the much-needed dairy product. In addition to co-writers and co-directors Law and Walsh, “Milkman’s” creative team includes a number of communication studies students including Nolan DeVoe, Ellie Schuckman, Sarina Sokoloff, Jason Monto, Peter Weiland, Stephen Walsh, Nick Wodeshick, and Carly Diamond. Co-director Law says that “We couldn’t have done it without our passionate cast and crew.”

Along with taking home the award for National Best Comedy, one of the most coveted awards at the festival, “Milkman” was also one of the top five nominees for Best Story. But their ambition doesn’t end there. According to Walsh, “Tyler and I are already back to the drawing board for our next big project. We’re always thinking about what’s next, and there’s always room for more improvement and learning.”