When describing the way in which traditional news media fairs in today’s digital world, China’s most prominent journalism professor said it’s like a “very small ship in a big sea.”

Traditional print media is no longer the dominant force behind how citizens get their news, he explained. Instead, media convergence is the key to future news consumption.

Jianwu Song, who visited the College on Feb. 13, spoke to a group of journalism students in the Beats and Deadlines class about media convergence in China and the ways in which news organizations are adapting to keep up with evolving technology.

Song is a professor at Renmin University of China, where he is also the director of the AsiaInfo Media Convergence Lab. His recent trip to America took him from coast to coast, visiting places like Stanford University and Google, to discuss the current media landscape across the globe.

Song’s research centers on media convergence, which is the way in which traditional print text combines with other forms of media, such as audio and video, to create more engaging content.

“Traditional media has lost its effect on citizens,” said Song, whose talk was translated by Yifeng Hu, an associate professor of communication studies at the College of New Jersey. 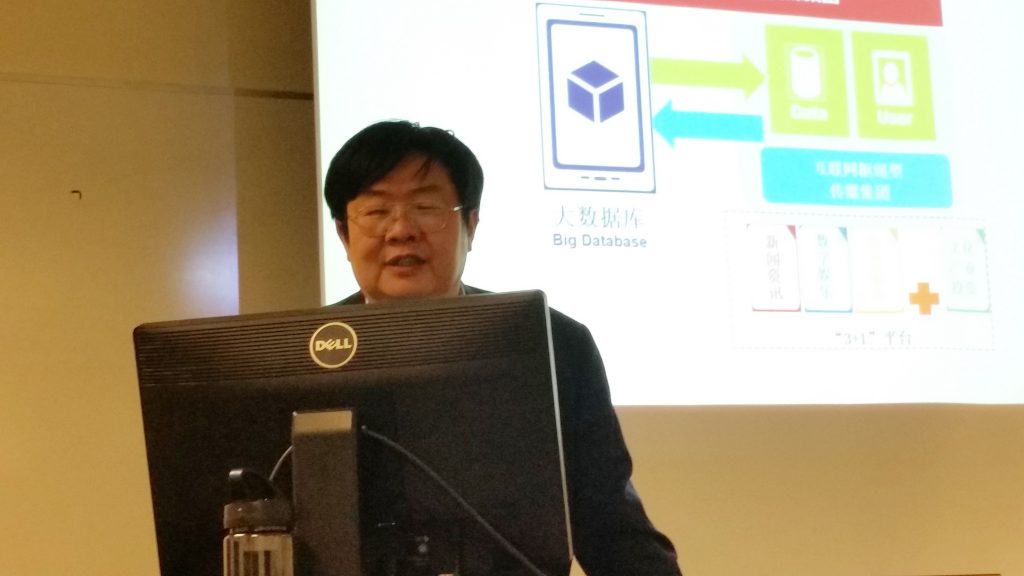 As Song explained, 53 percent of the Chinese population uses cell phones as their primary way of accessing news. As a result, news outlets in China have looked to media convergence to adapt and survive. The Chinese government, which has extensive control over the journalism community, is also pushing for this media renaissance.

To embrace media convergence, Song and his team developed what is known as a “Media Hub,” which is a place where content flourishes and attracts a lot of citizens. In addition to news articles, it also features places where users can enjoy digital entertainment like gaming, pay traffic fines and other tickets, interact with government officials and even make cultural industry investments.

Song considers the Media Hub to be similar to a central kitchen.

“These seats are for the main chefs who cook the nicest dish,” Song said. He laughed while showing a picture of where the bosses sit in the hub, which includes a 75-foot-long screen for showcasing content.

While others are trying to mimic Song’s work, he currently has the most advanced media convergence setup in China.

Even with his focus on evolving technology, Song acknowledges that journalism is facing a period of growth and uncertainty worldwide.

“It used to be quite the honorable thing to be a journalism student,” Song said in an interview with The Signal, citing his time as a college student. “Now things have changed. … A lot of individuals who work in the industry have left and switched to other industries.”

He has hope, though, that others will embrace the media’s changes.

“We are thinking of what kind of training can we provide to new students because the media is changing and society is changing,” Song said. “We are exploring these issues, as well.”