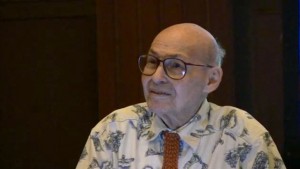 With the news of the recent passing of Marvin Minsky, the “father of artificial intelligence,” TCNJ reflects on his 2012 visit to our campus with gratitude and appreciation.

Minsky, a mathematician, computer scientist, and professor emeritus at the MIT Media Lab, was a pioneering expert on the theory of artificial intelligence. His 1985 book “The Society of Mind” is considered a foundational exploration of the diversity of mechanisms involved in intelligence and thought. Minsky’s last book, “The Emotion Machine: Commonsense Thinking, Artificial Intelligence, and the Future of the Human Mind,” was published in 2006.

TCNJ hosted the Music, Mind, and Invention workshop in Minsky’s honor in March 2012 to explore the rich interconnections between music, cognition, computation, and creativity. The Schools of the Arts & Communication, Engineering, and Science all collaborated together to jointly present this event, with additional support from the National Science Foundation. The workshop included a keynote address by Minsky and invited talks by distinguished scholars from Harvard, MIT, Princeton, NYU, Drexel, and Boston University. The co-founder of Harmonix Music Systems, known for the games Guitar Hero, Rock Band, and Dance Central, also spoke. Nobel Prizewinner and Mathematician John Nash was in attendance.