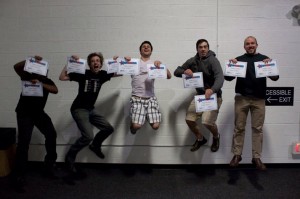 Is two days enough time to make a computer game? A team mostly made up of past and present College of New Jersey students made sure it was. At the 2012 Philly Game Jam this past summer, the students (including one music major and two interactive multimedia majors) created a computer game in which the player has the ability to control time.

At 6pm on June 15th in Oaks, PA, TCNJ’s Team Kairos began brainstorming game ideas for the 48-hour digital game-building competition, in which they competed against 9 other teams from around the Northeast Corridor. At 6pm on the 17th, they walked away with their 2-D puzzle platformer, Kairos, as well as the “Most Innovative” and “Judges Choice” awards.

In Kairos, the player controls the effect of time on objects that are close by. Over time, manmade objects (such as ladders and walls) rust and deteriorate. Meanwhile, vines will flourish and grow as you cause them to age. The player must use this ability to solve puzzles and reach the exit of each level.

Brett Taylor gave some good advice for future creatives: “Good ideas don’t develop in a vacuum… collaboration between different perspectives really is essential for designers who want to produce something that will face criticism. An open dialogue is just so important.”

The Game Jam was organized by the Philadelphia Chapter of the International Game Developers Association. The Too Many Games classic video game convention was also held at the Greater Philadelphia Expo Center in Oaks, concurrent with the Game Jam. This year, a 24-hour Analog Jam was held, in which four teams competed to build the best board game or card game.

Along with attendance at the IGDA Philadelphia’s summer picnic, TCNJ’s Team Kairos will be able to participate in next year’s Game Jam for free and help the college continue to gain respect from the game development community at large.