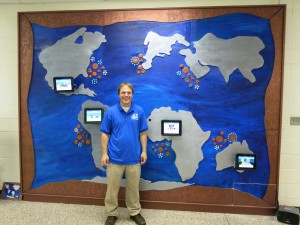 We have all heard the stories behind the religious holiday traditions of Christmas, Easter, Hanukkah, and Passover. We know to buy menorahs and candy canes and to dye eggs and spin dreidels. But what do we know about holidays like Guru Nanak’s Day, Eid al-Adha, or Diwali? Who knew that Sun Dance is much more than just a film festival? That, for some, July 24 is celebrated as Pioneer Day?

Students at Bear Tavern Elementary School do. Bear Tavern, part of the Hopewell Valley Regional School District, is taking serious strides when it comes to educating students on a wide variety of ethnicities, cultural traditions, and religious celebrations. To do so, they enlisted the help of Assistant Professor John Kuiphoff in the Interactive Multimedia Program at The College of New Jersey, an undergraduate major in which students develop digital and interactive media skills while exploring  the impact of technology on our culture and our communities.

Prof. Kuiphoff, who specializes in software development, interactive computing and web design, co-created and developed ZooBurst, a digital storytelling tool that lets anyone easily create their own 3D pop-up books. Working together, Prof. Kuiphoff and interactive developer (and fellow alum) Craig Kapp created a mobile application that allows these 3D books to be viewed on an iPad or online via a desktop or laptop computer. Using the application, storytellers of any age can take charge of their own words, ideas, and concepts, and bring them to life.

That is exactly what the 5th grade class at Bear Tavern did this past year.

“We knew we wanted our children to learn about religions and cultural traditions that were different from their own,” Donna Costanzo, chair of the PTO Cultural Diversity Committee explains. “But we were going about it in the wrong way. We had information about these various religions and traditions on display in the lobby in such a way that it was more suitable and interesting for the parents than the children. The kids would barely glance at the information gathered by adults. That’s when John came along.”

Prof. Kuiphoff knew that ZooBurst would be ideal for this project. “I wanted the students to learn,” he commented, “but also more than that. I wanted them to be able to take ownership of the project while thinking creatively along the way.”

And they were able to. The Cultural Diversity Project allowed the students to learn about other cultures and religions, and then create their own ZooBurst book about what they learned. In addition, the students were encouraged to think about how to utilize artistic and original thought, while maintaining a sense of authorship. Students had to spend time contemplating design, art and images, as well as wording.

But Prof. Kuiphoff and Bear Tavern Elementary did not stop there. 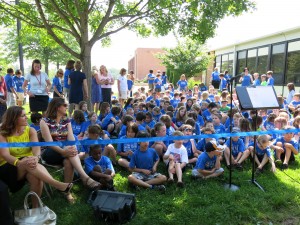 Prof. Kuiphoff, the PTO, school principal, art teacher, literacy librarian, current fifth grade Bear Tavern students, and several TCNJ students created a ceramic tile mosaic wall mural for the lobby of the school, and installed four iPads directly into the mural. The iPads were be placed at differing heights, and  uploaded with every student’s ZooBurst story. The mural was unveiled during Bear Tavern Elementary School’s 50th anniversary celebration on May 31, 2013.

The project won’t just stop at Bear Tavern, either. ZooBurst has been picked up by the remaining Hopewell Valley schools and offered to all teachers in the district. In fact, more than 130,000 registered teachers and students across the globe are using ZooBurst in their classrooms. It has been named one of the top Websites for Teaching and Learning by the American Association of School Librarians in 2011.

But elementary students are not the only ones benefiting from this project. It is also in the works to have the Cultural Diversity Project at Bear Tavern be incorporated into the Community Engaged Learning (CEL) program at the Bonner Center for Civic and Community Engagement at TCNJ. All 1,400 incoming first year students are expected to give back to the community and learn about civic service and responsibility through the CEL program.

“I want our students to not only make an impression, but also make an impact,” Prof. Kuiphoff stated. “Interactive Multimedia is not simply about designing a new video game. It’s about innovation, problem solving, and building upon the technological skills and knowledge learned to address current community issues.”

Prof. Kuiphoff earned a Bachelor of Fine Arts in Graphic Design at The College of New Jersey and a Master’s degree from NYU’s pioneering Interactive Telecommunication Program. He has designed and developed a number of innovative computer interfaces using microcontrollers, sensors and software libraries. His previous project ReedBox is a tabletop interface that allows people to play computer games using magnets. ReedBox was on exhibit at the New Jersey Festival of Electronic Arts and gained popularity after being reviewed in Gizmodo and Make Magazine.